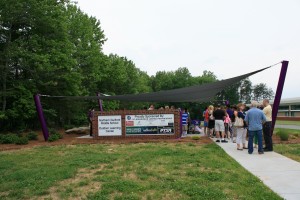 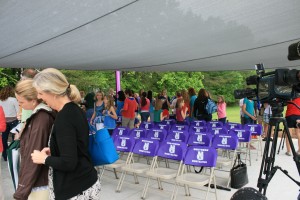 Northern Guilford Middle celebrates the completion of a classroom built with donations.
Sun May 19, 2013 News & Record
By Jonnelle Davis jonnelle.davis@news-record.com

GREENSBORO — Light rain began to fall Saturday afternoon as members of the Northern Guilford Middle School community gathered under the sail of their new outdoor learning center to celebrate its completion.

“This is not waterproof,” Principal Sam Misher said, eliciting laughs from the group. “Umbrella with holes in it!”
But hard rain held off, and the school officially “opened” its new classroom, which has been in use since the beginning of the school year.

The outdoor structure is an alternative learning space that teachers are using to enhance their lessons.

The outdoor classroom was built with $30,000 raised entirely from corporate and community sponsors. It is made up of a concrete base and an ultraviolet-resistant sail — a fabric top that provides shade — that is anchored by four purple steel columns.

No other Guilford County school has such a classroom, Northern Guilford leaders said.

Gabriel Sams, a seventh-grade social studies teacher, came up with the idea to build an outdoor classroom. Sams said while tablets and other technological gadgets are helpful in educating students, nothing beats a great learning environment.

“I’m a true believer of having a great environment to learn in,” Sams said.

Sams is known for doing things differently in his classroom. He said it’s not uncommon for him to sit atop desks or on the floor when he teaches.

When he taught aboriginal children in Australia, he used a stick to write in the dirt. “That’s kind of why I wanted to design something like this,” he said. “Something unique.”

Sams started his campaign for an outdoor classroom in 2010. Sponsors such as VF Corp., Honda Jet and Daystar Church donated money for the project.

The classroom has been in use since the beginning of the school year, but landscaping around the space was completed only recently. Teachers sign up to use the classroom, and Sams said it’s frequently booked.

Seventh-grader Hannah O’Kelley said she likes using the classroom in the mornings when she can hear the birds chirping and other signs of nature.

“I love this place,” she said. “It’s so awesome.”
Chairs decorated the classroom on Saturday, but the students don’t find much use for them when studying there during the school week. They like to lie on the concrete or up against the rocks, teachers said.

Jacqueline McDowell, a seventh-grade language arts teacher, has used the classroom in her poetry lessons. She brought the students outside recently to study imagery, telling them to walk around, and smell and feel nature to get inspiration for the poems they were assigned to write.

McDowell said the classroom is a safe space for students to learn outside.“I have a class of 33, and I can see every single kid when I’m out here.”

READ ABOUT OUR PROJECTS