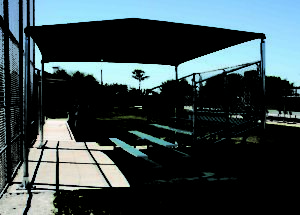 Carolina Shade Sails in partnership with Apollo Sunguard is pleased to highlight Pomona Park in Greensboro NC.  The field, owned by the City of Greensboro, has been used for many years by the Challenger League directed by the ARC of Greensboro. The former infield, surfaced in stone dust, was not very accommodating for athletes in wheelchairs and walkers – especially after heavy rain.  Brant Taylor, a Senior at Grimsley High School, earned his Eagle Scout badge by building an ADA-accessible surface for the ball field at the park.  Brant’s dream was to fund and build a field surfaced with Mondo – a rubber track surface material similar to that used for Olympic running surfaces.

The Bryan Foundation, through the Greensboro Grasshoppers, provided most of the funding for the project built by Medallion Athletic Products, Inc. of Mooresville, NC. The City of Greensboro paved the pad on which the Mondo Super-X rubber surface was installed. Fence Builders of Winston-Salem provided new fencing and backstop, and Apollo Sunguard – a Florida-based company – donated two sun-shades, one for each dugout. Other amenities will finish the project, as contractors and suppliers finalize the details on what has truly been an effort in community service, philanthropy, and public-private partnership. 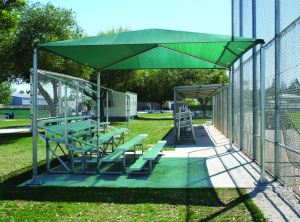 READ ABOUT OUR PROJECTS